Sprint Plans to Be First with the Treo 650

Sprint announced plans today be the first wireless carrier to offer the new palmOne Treo 650. The Treo 650 will be available next month at Sprint Stores, Sprint business channels and online for $599.99. Sprint business customers will also have the option to purchase a non-camera version of the device later this year.

"Sprint realizes that the mobile workforce needs to be able to perform a broad range of tasks in order to remain competitive and is committed to providing the necessary combination of cutting-edge devices, network capabilities and data services to make that possible," said Harry Campbell, president  Emerging and Mid Markets, Sprint Business Solutions. "The palmOne Treo 650 by palmOne is an incredibly powerful smart device that will make a valuable addition to Sprints broad portfolio of wireless offerings, unmatched by any of our competitors." 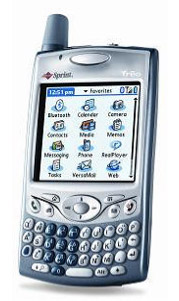 Building on the success of previous models, the palmOne Treo 650 is a truly life-simplifying mobile device for business users, enabling them to keep informed and in touch with access to business and personal email and text messaging, Web browsing, calendar, contacts and tasks. Operating on the enhanced Sprint Nationwide PCS Network, the Treo 650 by palmOne has 23 MB of user-available memory and is powered by the Palm OS 5.4 and an Intel PXA270 312 MHz processor. Built-in Bluetooth Wireless Technology provides the ability to wirelessly synchronize with Bluetooth-enabled desktop or laptop computers and easily connect with Bluetooth headsets and car kits (sold separately).

The palmOne Treo 650 by palmOnes candy-bar design has been refined with an improved backlit QWERTY keyboard with larger, flatter keys; strategic button placement for easier one-handed access; and a sharper, high-resolution color display for improved visibility in sunlight. Other user-friendly features include increased battery life (up to five hours of continuous digital talk time and over two weeks of digital standby time), a removable battery, built-in speakerphone and a non-volatile memory system that preserves data for a limited amount of time if the battery is removed or the device is drained of power.

"Consumers and corporations alike are realizing the benefits of the Treo. It extends their reach, increases productivity and connects them more closely to their friends, family, customers and partners," said Ken Wirt, senior vice president of worldwide marketing for palmOne. "Together with Sprint, were giving our customers another great member of the Treo smartphone family that delivers all they need to stay connected and in touch."

For content, the Treo 650 by palmOne has access to Sprint PCS Vision downloadable Games, Ringers, Screensavers and other Palm OS entertainment and productivity applications billed on the Sprint PCS Bill. It is also the first U.S.-based implementation of Handango InHand for Palm OS. An intelligent, device-resident download client for smartphones and wireless handhelds, Handango InHand for Palm OS features a wide variety of mobile applications and content including games, productivity applications, ringtones and more.

Related Articles...
More articles about Palm
Sprint Plans to Be First with the Treo 650 http://www.palminfocenter.com/news/7241/sprint-plans-to-be-first-with-the-treo-650/

eston @ 10/26/2004 5:41:16 PM #
Exactly. I worked for a government contractor as a handheld consultant for three or four years; the CEO carried an NR70V until they passed an actual law against them. I then had to make her switch handhelds (reluctantly, of course :) )

I expect the 600 will drop by $100 to have a "retail" price of $499 - making $319 (after rebates) an attactive price point for that model. If this is a closeout model, they might even drop it down to price match the cheapest of the PPC based phones.

Given that and the fact that the CDMA carriers will be crippling the BT, it makes a lot less compelling upgrade if you're with Sprint or Verizon. It's not like the 650 is EV-DO compatible. It is EDGE compatible though, so the CDMA advantage is further eroded there as well.

I don't want to give up a stand-alone PDA because I need more memory that what a phone offers (which is okay for battery life), and don't want to pull out a phone in front of patients. But I want to be able to carry some data on the phone, and it would be nice to be able to transfer files between them: docs, email, phonebooks, etc. Will this not be possible with Sprint or Verizon?

EV-DO = the device will *eventually do* what you want it to do, such as load a webpage or access something on the wireless network. No E.T.A. is promised with EV-DO.

EDGE = similar to EV-DO, but for CDMA customers (or is it the other way around?), it will eventually do what you want it to also, but *general E.T.A.'s* are given...such as 2 minutes for a webpage.

Could I use it to communicate with my existing T3? - Yes, don't they both have BlueToof? Expansion cards? Infrared (not sure on this one)?

AdamaDBrown @ 10/26/2004 2:06:32 AM #
EvDO is the CDMA carriers' new tech for high-speed wireless internet, practical speeds up to 30 KBytes/second. Currently it's only available from Verizon in about a dozen cities, priced at $80 per month, and requires a laptop PCMCIA card.

EDGE is a GSM based tech used by Cingular and AT&T. It delivers speeds of 8-12 KBytes/second, but is available on all of AT&T's network and most of Cingular's. Unlimited use is $20. The GSM Treo supports this.

Dave, the implication is that the Sprint and Verizon versions would not be able to be used as a wireless modem by a traditional handheld or laptop. So, unlike other Bluetooth phones, you couldn't use the internet connection through it. You should still be able to sync data to and from the Treo, and communicate with your T3.

pascanu @ 10/26/2004 4:43:52 AM #
EV-DO x1 is 2.4 MB/s (theoretical)
EDGE is up to 235 kbs (also theoretical)
However, my understanding is that due to high energy consupmtion EV-DO is not suitable for standalone phones since it will quickly drain the battery and will probably be available only as a non-phone device (PCMCIA, USB connection).

IndyDave @ 10/26/2004 8:34:18 AM #
Thanks for the info. My verizon contract is up in Feb and it's time to start reviewing other carriers. coverage has generally been great. only problem is with timely delivery of voicemail messages on occasion. And the pricing of additional services (e.g. data) doesn't seem competive, so time to 'splore other options.

One other thing that really bugged me, is that all you get is the pipe -- no email account, no web page space, no online storage. It was too spotty a service for me to use as a primary Internet connection at home (my dialup was limited to 28.8 on a *good* day), but luckily Verizon got off their duffs and finally offered DSL in my neighborhood.

I hated Sprint and I hated the Treo600

RE: I hated Sprint and I hated the Treo600

I despise Sprint partly because of their incompetent customer service, but their coverage and call quality are pretty good in my region. Factor in $15/month for unlimited data and suddenly they're the best of a bad lot.

The Sprint Treo 600 I had was a great PDA but it was also the worst cell phone I've ever used. Voice quality was horrible, the speakerphone was useless, sleazy Sprint tried to hide the data showing minute usage (eventually someone figured out how to display this info) and the phone's consruction was flimsy.

I think Palm is using a different manufacturer for the Treo 650, so hopefully they won't cut corners on construction this time.

RE: I hated Sprint and I hated the Treo600

IndyDave @ 10/26/2004 8:27:50 AM #
I agree. I thin the whole board understands you're peeved, but the sniping is tiresome. We all are free to express our opinion, good, bad, and otherwise. But you may be undoing any respect you accumulated on PIC with your unmitigated bile lately. At the very least, I hope you feel better for having an outlet to vent.

The article also said that PalmOne has sold more than 660k Treo 600's, and that Sprint will phase out Treo 600's after clearing their inventory.

Any news on bluetooth use for connecting to the internet...

Alchemist42 @ 10/26/2004 8:17:52 PM #
Sprints always been a bit strange in their use of phones to connect to the internet via vision... on one hand saying you cant do it, while at the same time selling software to make the connection via their website, etc. etc.

Sprint to date has had ONE bluetooth phone for this very reason... they dont want people to abuse unlimited vision service as an ISP replacement. So now that the Treo 650 has bluetooth... will you be able to use it via a notebook to connect to the internet?

RE: Any news on bluetooth use for connecting to the internet

"Unfortunently, Bluetooth on the Sprint unit that I had access to appears to be crippled. What Sprint has apparently done is turned off the ability for the Treo 650 to act as a modem for other devices, such as laptops or other PDAs. This is done using a Bluetooth profile called Dial Up Networking."...

The_Voice_of_Reason @ 10/26/2004 11:18:13 PM #
Sprints always been a bit strange in their use of phones to connect to the internet via vision... on one hand saying you cant do it, while at the same time selling software to make the connection via their website, etc. etc.

Sprint to date has had ONE bluetooth phone for this very reason... they dont want people to abuse unlimited vision service as an ISP replacement. So now that the Treo 650 has bluetooth... will you be able to use it via a notebook to connect to the internet?

Sprint sells a data plan for laptops + doesn't want you turning your $15 Vision service into a Bluetooth modem for your laptop. I'm still amazed the Sony Ericsson T608 (Sprint Bluetooth phone) ever was released. I expect they'll either crack down on data transfers or cripple Bluetooth as has been suggested above. This would lead to a cottage industry of flashing phones to re-enable Bluetooth. But the new memory format Palm's using might make this difficult. Those of us at Treocentral that were involved in hacking the Treo 600 earlier this year love a challenge. ;-)

RE: Any news on bluetooth use for connecting to the internet...

vesther @ 11/1/2004 3:56:07 PM #
Well, either Sprint starts supporting Bluetooth, or they risk losing customers with an appetite for Bluetooth.

RE: Any news on bluetooth use for connecting to the internet...

jteesy @ 11/4/2004 1:14:51 PM #
The T650 will have bluetooth dial-up networking enabled....hopefully sooner than later. The percentage of customers willing to spend upwards of $500 on a device (after rebates, but including taxes) is extremely small in comparison to the vast majority of Sprint customers who wouldn't part with that amount of cash, don't need the product, or both. In fact, I'd imagine less than all of those who do purchase a
T650 would use this capability (though it's better to have, than have not). Sprint isn't going to be adversely affected by the few of us who will. I know that they could always go back on their word, but I think Sprint understands they have more to gain by keeping us loyal than they do by dissing us. Links to their response to the bluetooth rumors: