A new Call Log application and Palm conduit for Mac OS X in version 6.0 provide access to the Treo's log of phone call information on the Mac. Users can sort, filter, annotate and search through the list of incoming and outgoing calls and view call dates and durations. Integration with Apple's Address Book application provides additional information related to known contacts, including company name and contact photo, while a toolbar button expedites the process of creating a new contact in Address Book from Call Log data. An export function provides the ability to use Excel or a database application to further manipulate the data, as might be used by attorneys or other professionals who track and bill for their time.

A new SMS Log application and Palm conduit for Mac OS X provide similar access to the Treo's log of sent and received SMS text messages. Messages are grouped by contact and easily searched using Apple's Spotlight technology. The SMS Log also integrates with Apple's Address Book app to match information on known contacts. This feature not only provides a backup for often-critical communications from a Treo smartphone, but it also allows users to access that information with their Mac.

A new Video plugin imports movies taken with a Treo smartphone either directly into a selected album in iPhoto or into a defined folder on the Mac's hard drive. Now Treo users have an easy way of getting movies they have taken on-the-go with their Treo into iPhoto, where they are easily stored and playable with the Mac's QuickTime Player.

The new Video plugin uses Apple's QuickTime technology to encode DRM-free videos for playback on Treo smartphones or on other Palm OS devices with an MP4-compatible player. Once encoded, videos are queued for download to the device during the next sync operation. This feature makes it trivial to get video content onto Palm OS devices for mobile viewing, enhancing their multimedia capabilities.

In response to requests from users, the updated Mark/Space Notes conduit in version 6.0 provides increased flexibility by allowing users to choose to synchronize handheld notes with either Mark/Space Notebook (which is included for free), Microsoft Entourage 2004 or Bare Bones Software's Yojimbo. 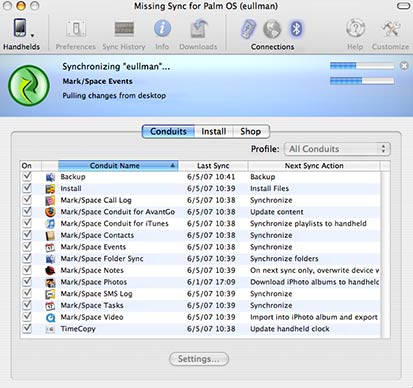 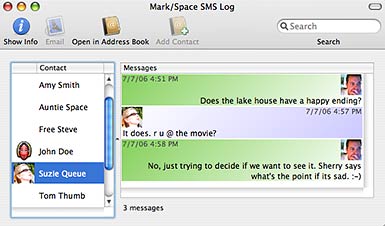 Pricing, Availability and System Requirements
The Missing Sync for Palm OS is available immediately as an electronic download from the Mark/Space Online Store for $39.95. A single installer includes English, French, German, Italian, Japanese and Spanish editions. CDs will be available in a few weeks for $49.95. Free upgrades to version 6.0 are available for anyone who purchased version 5.1 of The Missing Sync for Palm OS on or after May 1, 2007. Purchases prior to that date and purchases of certain other Missing Sync products qualify for a discounted upgrade to version 6.0 for only $24.95.

The Missing Sync for Palm OS requires Mac OS X 10.4.9 or later and a Palm OS device running either version 4 or 5 of the operating system.

MissingSync 5.1 is the worst thing I've used since ActiveSync. Unlike the rock-solid HotSync, MissingSync has been consistently temperamental and unreliable. Sometimes it will sync by USB cable, sometimes it won't. Ditto for Bluetooth connections. I've uninstalled it and re-installed it, and asked for tech. support, and received no help (I seem to recall a note saying they were understaffed). And now Mark/Space wants to charge us $25 to (hopefully) fix the bugs in it? Or is the basic functionality as buggy as ever, and all they've done is add on more flaky features? Make sure you test the app fully before you buy, and back up your Palm to a card before trying it (a user has posted a note over on versiontracker.com saying that MissingSync destroyed his database.

I guess mileage will vary. This has been a terrific ap for me when syncing my Tungsten E to my Mac. Absolutely no complaints, has always worked perfectly.

I've been using Missing Sync since version 4 and it hasn't given me any troubles yet. But different people will get different experiences.

I just purchased an upgrade copy and played with it a bit. I have to say I really like the SMS and Call Log syncing and viewing additions. Notebook is also pretty neat although I haven't played with it enough to know if it's actually as good as it sounds.

Wha? Are you kidding? You must be running MacOS 9. Palm couldn't make a reliable Hotsync app for OS X. Missing Sync was a savior to me! Granted, I remember a couple times where I had to kill the background process and re-open Missing Sync, but that was a simple process compared to the haphazard voodoo required to get the original Palm Hotsync to work.

Missing Sync 5.1 has worked flawlessly for me. I enjoy the ease at syncing with OSX's built in iCal and Address book as opposed to the Palm Desktop. The iTunes and Quicken Sync also to their job. I don't have a treo so those v6.0 features aren't as important, but the notebook feature looks promising. $25 seems a little steep for an upgrade, but I will give it a try and see if it is worth it.

I agree that it's a bit much looking for such a high upgrade price. I've had plenty of issues with 5.1 regarding bluetooth and cable syncing - apparently it is due to OSX update issues, but i would have thought Markspace could release some sort of fix for this as it has been an ongoing issue for months now. I won't be upgrading.

It's really disappointing to see such a high upgrade cost.

The upgrade cost is actually over 60% of the original cost! And what it adds is merely a few more conduits for syncing.

This is definitely an expensive piece of software and they are not treating loyal customers that well.

Good point. My concern is how long is this update going to be good? Come this fall when Leopard comes out is Missing Sync even going to be needed with the new OS?

Well, I got suckered into buying the upgrade to 6.0 thinking that those geniuses at Mark/Space had actually paid attention to solving a problem with their software, but no...wrong again and out the price of admission..:

The dreaded #16394 error, which when you search on their website has no explanation.

I really hate their software. It used to work fine. I will be happy to change my opinion, when these errors have solutions on their website or in their software.