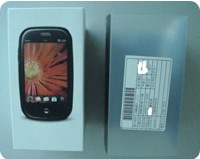 MaxPDA, a Chinese-language mobile site, has uncovered several high-quality shots of the Pre's finalized retail packaging for Sprint, as well as some of the box contents, with additional details being subsequently reported by PreCentral. The final Pre box is essentially shaped identically to the clever "wedge" design first used on the Treo Pro last year. While we spotted a mockup Pre box at CES, the package design and box contents for Sprint had not yet been finalized.

Some additional pieces of info gleaned from these spy shots are that the device's SKU is PALM100HK and the fact that it has passed all FCC testing and certification. One image shows an affixed sticker listing a "2009-05-04 11:00". This is presumably a production lot decal indicating that this Pre rolled off the line on either April 5th or May 4th.

The getting started foldout guide lists creating a "Palm Profile" as one of the initial tasks required, so this is when the user will establish their cloud sync and backup preferences with Palm. This is also the likely opportunity, PreCentral reports, to download and use Palm's Transfer Assistant to import any legacy Palm OS PIM data to the Pre, as mentioned earlier by Inside Sprint Now.

Another revelation from the leak is the list of the contents of the Pre's box itself, reportedly the Pre itself, a microUSB cable for USB data transfers, a travel charger (also microUSB), the 1150mAh battery and a "phone pouch". It's encouraging to see Palm continuing the trend begun with their recent Windows Mobile devices of not bundling a CD with their devices. Fortunately, a stereo headset also makes a welcome return appearance after being omitted from the Sprint Treo Pro package. 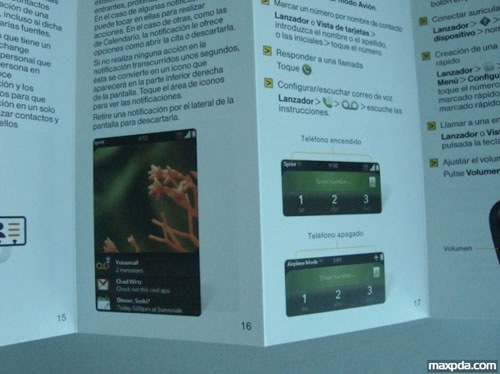 Additional discussion and images are available at the PreCentral forums, including this bit from PreCentral's Dieter Bohn about the Pre's hearing aid compatibility. Unfortunately for users with hearing difficulties, the Pre is reported to be classified with the slightly inferior "M" rating as opposed to the vastly preferable "T" rating.

... all of this turns out to be one grand conspiracy and the Pre is actually never released? What then?!! Wow, I'm sitting here on the edge of my seat, shaking with fear, uncertainty and doubt. WHAT IF?

... these are all hoaxes and the actual Pre ships unlocked with dual CDMA / GSM radios, unlocked, and only $49 w/out contract? You never know ... iddennat what they say about the lottery?
Pat Horne

What?! What do they say about the lottery? And should I be in fear, uncertain and doubtful about that too?!!!!!

I wonder why yet nobody's posted "WTF, no hearing aid level T? Sorry Palm, that's a deal breaker... I loved you for so many years, now you'll go down."

Perhaps an article on the shipping box for a device that itself remains vaporware is insufficent reason to comment?

I don't think I ever had anything that worked with the T-coil. I normally just take out the hearing aid and put it in my pocket and just listen with my bare ears. But that only works for phones/headphones since they are so close to the canal.