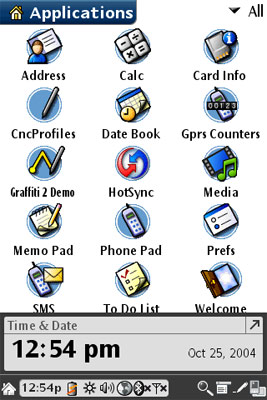 The Palm OS is a smartphone and PDA operating system. The latest version is Palm OS Garnet 5.4.9.

Palm OS v1.0 was originally released in 1996 on the Pilot 1000 handheld. With the launch of the Palm III series, version 3.0 of the OS was introduced. Incremental upgrades occurred with the release of versions 3.1, 3.3, and 3.5, adding support for color, multiple expansion ports, new processors, and other various additions.

Palm OS version 4.0 was released with the m500 series. This added a standard interface for external memory cards, improved telephony libraries and security.

Palm OS 5 was released with support for ARM processors. It has been revised a few times since with various mainteance releases. v5.2 introduced a universal sound and graphics library across devices and introduced Graffiti 2.

The successor to Palm OS 5 was slated to be released as Palm OS Cobalt (6.0). It was developed by PalmSource but never adopted by Palm Inc or any other licensees.