With so much ongoing chatter about Palm's Pre smartphone and their new WebOS platform, it's easy to forget that the device may still not hit store shelves for another four or five months. So until then, Palm must make do with their carryover legacy products, such as the Centro and Windows Mobile Treos.

Palm's recent Centro refresh for Sprint brought two new colors, olive green and rose, in addition to the standard black which will eventually be updated to the specs of the rose and green models. Despite being announced last fall, these new expanded memory units have not been heavily promoted until now. A leaked upcoming Best Buy retail store flyer shows the refreshed 128MB Centro, is available for free with contract in-store at Best Buy. 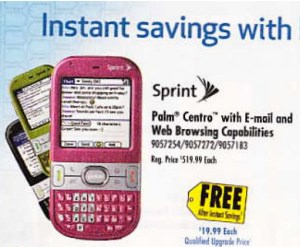 While the ad would lead one to believe that the black Centro being offered is the refreshed version, Best Buy's listed SKU number for the black Centro (9057183) indicates that this is still the "old" black 64MB Centro. Presumably, the 128MB black version will eventually be offered alongside the green and rose color schemes as stocks of the older version are depleted.

Existing customers eligible for upgrade pricing by signing a new contract can pick up these Centros for just $19.99. This pricing will be in effect from Sunday, January 18th through Saturday, January 24th and may not be available in all Best Buy stores or regions.

In addition to the main attraction of 128MB of user-accessible memory, the new Centros are distinguished by several additional small upgrades: soft-touch exterior paint, and a slightly revised "gel" keyboard. In addition, the new Centro ships with a slightly updated 1.08 ROM onboard with the Google Maps My Location feature standard alongside's Palm's FaceBook app.

They should sell them at Walmart.

Hey you. I bought my first computer at Toys-R-Us. Commodore-64. (Crap, here comes all the nostalgia again...)

Mike, just for nostalgia purposes and a slight change of pace, can you briefly detail here your former life as a published author of Commodore 64 computing books etc? I'm not being silly here-I love reading those old books from the halcyon eary to mid-80s days when the computer was going to change EVERYTHING!

Did you frequent the GEnie, TheSource, or the Compuserve boards back in the day? You should post the full text of those classic tomes as PDFs on your blog-who owns the copyrights??

I own the Copyrights. But my former publisher thinks it still has some juice, so nothing can be done yet. Republish? I'd like to bury them. Man, I really hated writing them - especially the final Directory, which my former publisher HEAVILY interfered in!

Christ, GEnie! I forgot all about that one.

Do you, ahem, "think fondly of" any of those titles at all? What was the target audience back in those days ('84-'86, presumably)-high school-age teens or college kid types or adults dipping a toe into the "family" computer world or what?

Did you ever contribute anything to some of the old classic mags such as Gazette, RUN, Byte, or Commodore World?

Now I'm going to have to hunt down one a tattered old physical copy of one of these books just to satisfy my curioisty, damnit! I was JUST about to toss our my old 1541 & 1703 but the fires o' nostalgia may yet be rekindled!

i got my C-64 for Christmas '83 or '84. i think it was $200 from KMart. i remember "programming" in BASIC - copying the programs listed in the included book. i remember the organ program which let you turn your C-64 into a piano. of course i had no disk drive at first so lost everything upon shutdown. then over time, i got the 1541 Disk Drive, the generic 64Modem, the MPS-80 Dot Matrix Printer, 1702 Monitor, and finally a "FastLoad" cartridge and a second Disk Drive. through the local "BBS" i met some other kids and we all traded cracked programs over the modem and then in person. I forget how we did it. i tested Compuserve a few times but it was too expensive - couldnt afford the fees - but i was amazed how i could chat (CB Simulator) with people all over the world! what a concept! little did i know how it would change the world. used to use both side of one 5 1/4" disk by cutting a second notch on the side. Favorite Game - "Beyond Castle Wolfenstein". did many late night last minute high school and college papers on that puppy. it paid for itself many, many, many times over. i think all that shiiit is still sitting in my parents attic. good times.

No. It brings up flashbacks of dealing with that &^%$ing publisher.

did anyone else know this? if you click on pocket tunes while your USB sync cable is connected you get a Sync Music Mode? almost like a Thumb Drive?

this is all new to me.

I knew it! I don't use it, though, 'cause the transfer rate is so freaking slow. Much better just to use a card reader to copy the files straight over, although it's good in a pinch.

It shows up in Windows as an "MTP Media Player". Works with WMP and Winamp, not sure about any other apps.

Yeah, it's nice if you have a few hours available for syncing over USB v1.1. I just use a card reader.

Pre USB Sync should be FAST

Bluetooth sync should be a lot faster too, if it's still an option.

Yup, BT 2.1 + EDR is fully supported on the Pre and should fly on a PC with the appropriate BT hardware/drivers/OS/BT stack. I mean, Palm mentioned BT 2.1 + EDR several times at CES so I doubt they'd mention it if it wasn't in some way usable on a PC...I doubt they'd make it a main bullet point just to tout the A2DP support. In fact, that was something I was thinking about the other night (that Palm wouldn't mention BT support so prominently if they just wanted the Pre to be used with mono headsets and A2DP headphones).

I think the hardware supported/performance enhancements of WebOS vs. the FrankenGarnet legacy are so many and so vastly superior that it's a difference of night and day.

I have had no complaints syncing my LifeDrive with all of its data, via USB. And that's over 2700 Memos in there! What do *you* have that takes so frikkin long?

(My only complaint is my damn sync cable apparently has a kinked wire and I have to hold it at A Certain Angle for the connection to be made. Sheesh!)

The LD was the only Palm OS device that ever supported USB 2.0 speeds (or anything even close to it IIRC)

hmmmmmmmmn...so is the USB speed limit a software and/or hardware limit on the Garnet devices? if the LD could do high speed, why didnt they update the new treos/centros if it wasnt a Garnet limit?

also, syncing a lot of Memos (Text) is nothing like a lot of media.

Yeah, the LifeDrive apparently was somehow hard-coded to support a separate USB 2.0 controller on the device. I suppose they shoe-horned the proper support for that oneo the LD's version of FrankenGarnet.

Remember that announced but seldom seen and never officially released LifeDrive "camera companion" accessory Palm showed early on? Another use the USB 2.0 capabilities.

That thing Palm was gonna release was apparently a dumbed-down version of something like this:

>>>The LD was the only Palm OS device that ever supported USB 2.0 speeds (or anything even close to it IIRC)

Whoa. You mean the LD actually has something *good* in it?

I've never used Drive Mode, based on the nightmares others have reported.

I've used the LifeDrive Manager to move big vids over into internal memory (a CF). Other times I've used an SD card reader/writer. Eh. That kind of thing *never* goes as fast as I'd like.

The LifeDrive had exactly four things going for it that other Palm OS handhelds didn't have:

2. "gigs of internal storage" (ruined by using a Microdrive instead of flash, of course

EVERYTHING else about the LD was/is an utter disaster

I'm wondering if the Pre announcement led to two consequences:

1) Killing existing PalmOS device sales - because, really, who wants to be stuck with the Old Thing?

2) Driven away buyers who were going to upgrade - because the Pre has shown throwing more money at classic PalmOS is just wasted?

1. Aye, but you have to imagine that they had planned for this to occur

We are seeing the "m500 effect" (previously known as the "Osborne Effect") at work again...but really, what choice did Palm have in the matter? Also, they are probably holding the CDMA Treo Pros in reserve until Sprint can clear out some more 800w's and to afford Palm some timely news after the euphoria of last week's announcement finally wears off. So I'd figure them holding back an official CDMA Pro announcement for another 3-4 weeks.

If I were in Palm's shoes right now, I'd slash the MSRP of all 3 PDAs by 50% and try to move as many as possible over the next 6 months by whatever means necessary. Clear the channels! Then drop the unlocked GSM Centro by $100 or so and try to get the 128MB Centro on Verizon or AT&T or at least in unlocked form. It also might now be a bad idea to start trying to dump whatever 800w's are left as well.

It's worth dumping inventory and reducing the ASP of your legacy product now just to keep the good ship Palm sea-worthy until the Pre arrives. Also, dropping prices on legacy Garnet products might combine with the lack of backwards compatibility on WebOS to entice all of those, ahem, "Mike Cane types" to run out and pick up a heavily discounted TX or Centro as their final helping of classic Palm OS goodness.

I'm toying with the idea of going for a Pre, just to play around with it, and perhaps ditch the iTouch. If I do that and there's no sight of an emulator, I'll HAVE to pickup a PDA to charge and carry around too, as I will lay money on the fact that few if any of the applications I rely upon each day will have been ported to the WebOS.

Many people stuck with the Newton way past year 2000, and I have a sense that Garnet devices will become more "in demand" as the reality of what the Pre *can't* do become apparent.

please tell us - what Garnet apps do you rely on every day?