Palms earlier claims of an unspecific late summer retail availability for its new Foleo Mobile Companion now appear to be slightly off course. A recent CNN/Money wire article entitled "Palm Looking for Linux Developers", gives a revised launch date of some unspecified date in September instead of the August availability many have been anticipating.

This news arrives in a timely fashion alongside this weeks announcement of Wind Rivers collaborative efforts with Palm and the LogMeIn Remote Desktop release.

The CNN article goes on to offer some tantalizing tidbits for eager Foleo fans, including the claim that Palm has made a number of improvements and changes to its instant-on flagship mobile product since the initial May 30th unveiling. Yet, CNN claims, the Foleo is still in need of additional software support from developers well-versed in Linux to extend the devices basic capabilities outside of the usual the web/e-mail/Office documents feature set triumvirate.

Fall 2007 is looking to be an increasingly busy period for Palm, what with the above Foleo news and the constant rumors of anywhere from one to four new Treos rumored to launch this fall. 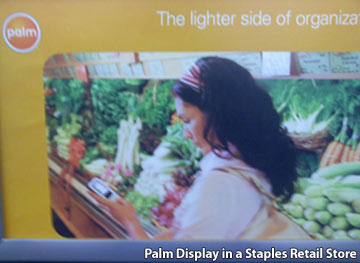 In other possible Foleo-related news, my recent trips to several local Best Buy and Staples stores revealed the PDA areas to again be in the midst of reorganization, presumably to make room for a coming Foleo display. While no new plans have been announced concerned the Foleos retail availability aside from Palms own retail stores and kiosks, the continued presence of Palms remaining PDA models combined with new in-store fixtures and signage is a positive sign indeed. The new end caps and display materials in major retailers such as Best Buy and Staples suggests that Palm is looking to maintain or even increase their toehold in the brick and mortar retail market on the coattails of the Foleo.

PICs full section of Foleo coverage can be found here.

I believe the last day of Summer is September 22. So if Palm can get the Foleo out before that date, their announce release scheduled remains "on course".

As I mentioned in another thread, the whole idea of a lightweight writing tool finally clicked for me the other day. But I'm having a hard time justifying that initial price. How many out there are like me - liking the idea and the form factor, but not willing to pay that much?

I like the idea and FF as well. I use a work supplied IBM x41 for business use and even though it is a pretty small laptop it is more than I need/want most of the time. I VNC into either my PC or UNIX machine to do work during meetings so a slim client device with VNC connectivity and all day battery life would be perfect.

Even though I use hibernate on the laptop the combination of backup and anti virus programs that automatically run on it kill about 10 minutes of productivity during my Monday morning meeting while I wait for it to catch up from the weekend's off time. And if I am not paying attention and don't tell it to defer the backup I can kiss the entire meeting goodbye as the little machine can't multitask during that time.

But I agree $600 seems a tad high for what they are offering, maybe I can pick one up on clearance in a year or so...

agreed - but I think at a $199 pricepoint they would sell like hotcakes! Any more and i'd buy a cheap laptop...

The last day of summer is the day that this baby finally hits the shelves, web, & carrier stores. Even if it's November 3rd?
Palm, just make sure it's right. Nobody wanted or expected it, so your beating nobody to market. Just get it right, right, right the 1st time. No way you'll get a 2nd chance to make a1st impression.
I'm interested.

Since I'll have my employer purchase it for me, the price isn't too great a concern for me (although $500 has a much better feel to the pocketbook and senses than $600). However, the lack of specifics leaves me with doubts about multilingual support, the ability to run old Palm OS software, connecting to my Mac, and working without a Treo.

To try to answer some of your questions:

Language support: English and Spanish at release, other languages added later (the capability is already built in).

Ability to run old Palm OS software: None. Developers need to create new software for the Foleo, because it is a new operating system. Would you really use a Palm OS application on a device like this anyway? I mean, you could run Palm apps in POSE on a laptop, but would you really want to? Foleo should have apps that are designed for the hardware.

Connecting to a Mac: The flash drives have the same profile as a USB thumbdrive, so if those work with your Mac, so should the Foleo, at least for moving files back and forth.

Working without a Treo: There is WiFi connectivity, and the applications (except possibly VersaMail, which we haven't heard about yet) all run free-standing.

> ...[b]Ability to run old Palm OS software:[/b] None.
> Developers need to create new software for the Foleo,
> because it is a new operating system. Would you really
> use a Palm OS application on a device like this anyway?
> I mean, you could run Palm apps in POSE on a laptop, but
> would you really want to? Foleo should have apps that
> are designed for the hardware...

and the posts following it in its same thread might need some regurgitation!

The question was about running Garnet applications on Foleo, not on a smartphone.

>>>Ability to run old Palm OS software: None. Developers need to create new software for the Foleo, because it is a new operating system. Would you really use a Palm OS application on a device like this anyway? I mean, you could run Palm apps in POSE on a laptop, but would you really want to? Foleo should have apps that are designed for the hardware.

It was STILL stupid of them not to create a compatible Calendar to sync between a Palm PDA/phone and a Foleo. Now there's a 3rd-party Calendar. What happens when Palm migrates everything to "FoleoOS" -- the 3rd party is bankrupted?