Sony has lowered the price of it's high end clamshell handhelds. Both the NX80V and NX73V price tags have been lowered by $50. The NX70 has also been discontinued. 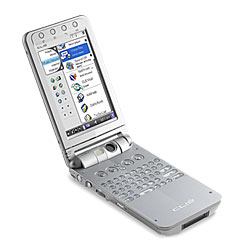 The NX73 has been reduced to $449, from it's $500 debut price. The NX73V comes in a similar form factor and specs 16MB of RAM, a lower resolution camera and no camera light.

You can order the models directly from Sony Style, or search for the lowest price on the net with our comparisson shopper. SonyStyle is currently offering free shipping on all handhelds as well as a few other deals.

NX70 Discontinued
The NX70 has been removed from SonyStyle and is presumed discontinued. It had previously been selling for $399. The NX70 was Sonys first Palm OS 5 handheld and was released in October of 2002.

This way to the egress...

Konstantin @ 10/7/2003 1:56:39 PM #
This is realy interesting, a PDA cluster. Like making a wide screeen of various PDA's togeder. Do anyone have enough time to kill in such project? (maybe enough money to burn?)

Palm_Otaku @ 10/8/2003 3:22:18 AM #
The *coolest* feature about the dual-screen AF is that you can wear them in a new Glasstron(tm) frame (optional accessory) thus getting a virtual 3D screen with a viewing image equivalent to a 75" Plasma HDTV display.

In conjunction with a new bluetooth JogFinger(tm) (optional accessory), you can interact with the image using gestures (similar to using a touch screen).

The downside is that the AF is going to cost $2999 and the optional accessories are $299 each. Still, I'm gonna preorder ;o)

RE: Still too expensive

RE: Still too expensive

vesther @ 10/7/2003 6:07:19 PM #
Even with the $50 drop, you're STILL paying for the Sony Name, making these handhelds unaffordable to a degree. I'd rather have a PalmOne-branded Handheld and placed an Add-On on my Wish List.

If you need a Sony Handheld, though, I'd go for nothing less than the UX-50, in spite of the Landscape-Only Screen. The NZ90 is also a good device, but is just overpriced.