SanDisk made a number of new flash memory product announcements in Las Vegas at the Consumer Electronics Show. The company showed a new line of cards for video games, a SD card with built in USB 2 flash drive and announced that their new TransFlash will be used in some upcoming feature phones.

SD Video Game Cards
SanDisk Corporation (NASDAQ:SNDK) announced that it is entering the portable video game accessory market and introduced a line of flash memory cards targeted at the $25 billion dollar video game market. SanDisks entry into the video game market comes as companies that manufacture portable video game consoles develop devices that include slots for standard flash memory cards. The company has adopted unique game packaging and redesigned the look and feel of the cards to spur sales among younger consumers.

SanDisk is initially is offering the new game cards in Memory Stick PRO Duo and SD, one of the most popular card formats. Sonys first handheld game device, the PlayStation Portable, has just been introduced in Japan and uses Memory Stick PRO Duo cards. International Data Corp., a leading market research firm, estimates that 8.8 million PSPs will be sold in 2005. Other popular portable game machines, such as the Tapwave Zodiac and the Gizmondo, have slots for SD cards.

The Memory Stick PRO Duo cards in game packaging will be sold in capacities ranging from 128MB to 1 gigabyte (GB) with suggested retail prices from $39.99 to $159.99. SD cards for the game market will be sold in several capacities from 128MB to 1GB with suggested retail pricing of $34.99 to $104.99. The cards will start shipping to stores this month. SanDisk introduced an innovative SD flash memory card with built-in USB connectivity. The new product means greater convenience and cost savings for consumers who can just plug the SD card into any SD card slot such as is used in most digital cameras, and then plug it into any USB port without needing an SD card reader to transfer data, images, audio or video between computers, digital cameras and other electronic devices.

Michael Morganstern, a SanDisk product marketing manager, said, "We developed a new mechanical design which allows us to fully contain a high-speed 2.0 USB flash drive within the small SD form factor. The innovative mechanical design eliminates the need for a removable cap, which can be lost, and results in a dual functionality card that is fully SD compliant. The device also features an LED that blinks when data transfer is taking place to indicate that the card is being used as a USB flash drive."

The first products to be released by SanDisk with this breakthrough technology are scheduled to be introduced in Q1, 2005. SanDisk will provide further product details at the annual Photo Marketing Association (PMA) show, Feb 20-23 in Orlando, Fla. At that time, SanDisk is expected to introduce capacities as high as one gigabyte.

Since phone makers are incorporating more multi-media features into their products  such as higher-resolution digital still cameras, video camcorders, television and MP3 music  many of the newest phones are being designed with slots for flash storage cards to meet the growing memory demands. As the smallest of these form factors, TransFlash allows manufacturers to provide removable memory that is compatible with any SD card-enabled device, through an adapter. TransFlash capacities range from 32 megabytes (MB) to 256MB.

Motorola is introducing the MS 400, another TransFlash-enabled phone, in the Korean market. This mini-slide phone has a camcorder function, MP3 player, organizer function, auto-answering, voice memo, speaker phone, e-book function and the ability to connect to a personal computer via a standard USB data cable. The TransFlash module is sold as an optional accessory. 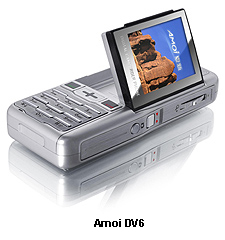 Amoi Mobile, one of Chinas largest consumer electronics manufacturers, plans to release four handsets with TransFlash slots, worldwide during 2005. Depending on the model, functions can include a 1.3-megapixel rotational camera, MPEG 4 video camera, MP3 player, USB storage with PC cable, e-mail capability, data storage software and Bluetooth. Among unique features, the DV6 has a pop-up LCD screen, the WMA9507 supports video telephony, and the G6301 has a hidden Qwerty form factor. The DV6 and the G6301 are EDGE phones while the 3G phones of WMA9507 and CMA8301 are both dual modes, the first combining UMTS (WCDMA) plus GSM/GPRS and the second combining CDMA2000 1X/ EV-DO plus GSM/GPRS.

How about releasing what you promised before announcing new products or announce that the 2 Gig SD is vaporware.

Bigfoot,
Had they kept quite about it @ CES, then you would not have an article to comment on.

Unfortunately they pretty much corner the market on SD innovation. It looks like I have little chice but to wait for their product if I want 2GB...

More vapors from a craptastic company? Great idea if they can pull it off without making fragile, self-destructing cards.

The *entire point* is that they are breakable. Research has shown people don't lose them enough to keep buying more.

Bottom line: We'll soon have more storage than almost EVERYONE needs, just as PCs are already more powerful than what research shows 99.997% of users need. Tech companies are victims of their own success and they're failing to find convincing reasons for users to upgrade.

Your four year old CLIE S320 and a 32 MB Memory Stick is as cutting edge as Joe Average needs. This is part of the reason PDAs "jumped the shark" in 2004.

Dear Voice of a Fool -

By the way, Mike Cane:

Where are the PalmOS powered micro laptops?

Where are the PalmOS-powered multimedia players (iPod + video player)?

Where are the PalmOS-powered always-connected Internet machines?

Where are the PalmOS-powered cellphones?

These are the kind of devices that could have taken PalmOS to the next level and justified the type of hardware (fast processors, slick screens + huge storage cards) that will be available before the end of 2005.

Sony's UX50, TH55 and VZ90 and Handspring's Treo 600 were several baby steps in the right direction. Now, hardware innovation is dead, taking PalmOS down with it. I think your S320 is a lot better device than any regular PDA pa1mOne is selling right now. Makes me wonder what the he11 people like Jeff Hawkins and Palm's so-called visionaries are doing. Tungsten 5 and Tungsten E2 are products I would only expect from a cynical company that's just trying to milk the remnants of its 15 minutes of fame for all it's worth.

Does ANYONE at Palm actually care about the platform? The silence is deafening. As usual.

While I praise SanDisk for something good....

While I praise SanDisk for coming up with a SD Concept that allows us to use "them" just like we would with a Thumb Drive, they have a lot of catching up to do IMO because I still remember the major controversy behind the "Tungsten T3 the Toaster" days, which a SanDisk card would become destroyed if a SanDisk card is inserted inside a Tungsten T3 and activated--all data would be lost afterwards.

I just don't want another "Handheld the Toaster" episode come new SanDisk SD Card releases, that's the most important thing--Two things that made me despise SanDisk as I know it--Worked well with an m125, but began dying out on my Tungsten T. Lexar-rebranded SanDisk card just "tore apart" after some use--durability issues.

I just bought a SanDisk 1 GB Sd card, and looking around here it looks like alot of people have had trouble on SanDisk cards. Does anyone know how well the Sandisk 1 GB card works on the Zire72?

Sometimes the simplest ideas are...

Quote=Sandisk:
SanDisk introduced an innovative SD flash memory card with built-in USB connectivity.
/Quote
Well, yet another T5 feature struck down (flash drive). And yet another nail in the T5's lead casket, assuming this makes it to the market. I know I'll buy one in a heartbeat.

If the idea is that this was "introduced" with a screenshot from Solidworks (and they didn't even have a physical prototype), I would guess that Q1 '05 is quite ambitious. Any CAD-jock could mock up that shot in 2 hours.

True, but this SD/USB card would sell like hotcakes if they market it well enough.

About the SanDisk SD Card with USB Connectivity, I just don't want yet another episode of toasted cards again, as I have realized that much of the cards SanDisk produce are of inferior quality.

If the quality of these newer SanDisk SD Card turn out to be inferior, then it looks like their ideas might backfire...