A new ChangeWave survey has been released indicating a groundswell in increased popularity among corporate customers for Research In Motion's BlackBerry platform. This gain for RIM comes at the expense of Palm's Treo smartphone line, which has plummeted to third place behind Apple and barely ahead of industry stalwarts Motorola and Samsung.

Of those surveyed, 73% claimed that a BlackBerry device was their company-issued smartphone of choice. Only 18% of the survey's respondents chimed in with Treo usage, dramatically down 10% from a year ago and down 5% since this past August.

In the area of user satisfaction, Palm again comes in dead last, just like in January's ChangeWave smartphone satisfaction survey. Here, the results flip-flop between Apple and RIM, with Apple taking the honors with the highest satisfaction ratings at 59%, RIM a moderately close second at 47%, and Palm coming in dead last at 10%. 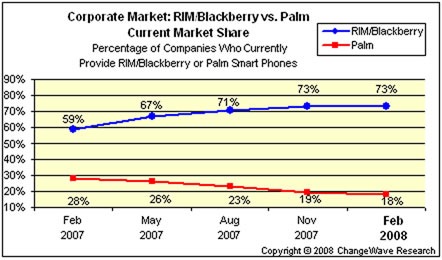 With a fading Palm OS product lineup and no clear release date for the new Nova OS in sight, Palm is looking to its Windows Mobile Treos to fill the void in an otherwise lackluster 2008. The surprise success of the entry-level, consumer-oriented Centro smartphone may also create a halo effect to boost the entire Palm brand. Unfortunately for Palm, it appears that few corporate buyers are awaiting the rumored Treo 800w, "Drucker" and "Wanda" Treos; just 8% of surveyed corporate buyers plan on future purchase of Treos for deployment within their companies. Smartphone upstart Apple is a distant second to RIM with 11% surveyed corporate buyers planning to purchase the decidedly corporate-unfriendly iPhone. Motorola, at 7% and Samsung at 4% are nipping at Palm's heels but also suffering a downturn at the hands of the BlackBerry juggernaut.

Palm's surprising lack of a Windows Mobile version of the Treo 755p combined with an unusually long delay in bringing a WM6 device with wi-fi and/or a 320x320 screen to market show that the company has not been aggressive in targeting the crucial corporate sector, especially in the midst of an economic downturn where consumers may balk at purchasing smartphones with personal dollars for use at work. Unlike Palm, RIM has improved in leaps and bounds over the past year or two by tweaking its devices to make them more compelling offerings for individual users by beefing up their multimedia capabilities and adding GPS integration to the Pearl while still passing muster in the corporate world with the global GSM/CDMA 8830 and wi-fi on select models.

Despite some recent widespread service outages that gave Palm's marketing department reason to take potshots at RIM's purported e-mail unreliability, Palm's downward slide in both user satisfaction and corporate adoption looks to continue with no end in sight, especially as the company digs in for a lean 2008 while furiously working on completing its Nova OS.

Aw gee - they REALLY should have had...

...the iPhone curve in there as well.

Why does Palm still not get it? The most pressing requirement for Palm to succeed is a consistent, cross-carrier, reliable, enterprise email platform. RIM figured this out years ago. But Palm still lets carriers screw up the email experience.

I think more interesting in this survey is that Rim stayed flat. As more and more enterprises look at TOC, I think you will start to see this trend reverse. Palm just needs a KILLER WINMOB product with GPS, WIFI, etc.

I was going to comment on that, but decided against it due to this being a Palm-oriented site and not a RIM-related site.

My comments about the poential upcoming WM6 releases by Palm (as well as the surprising lack of a 755w and/or a WM Treo with the "must have" features) basically touches on that. Palm can claim they are shackled by the limitations of Garnet for the lack of many must-have features on the Centro & Palm OS Treos. But to be handed a modern, robust, popular OS like WM6 and to keep delivering 240x240 screens, BT 1.2 and no wi-fi or GPS is just ridiculous.

Actually I think that GPS and the like is not the kind of features corporate people want/need. What people dig is a robust, perfectly integrated email and group calendar platform. One that meshes seamlessly with Exchange and Lotus. RIM does this right for corporate people.

For personal use I guess the features you mention are most important, and the integration with email and calendar must be done "good enough".

Me being a die-hard Palm user, I still carry my TX around for some tasks, but I basically use my company BlackBerry for everything else.

That is a Scary Chart

That's about a 35% drop in Palm over the period. That's serious! RIM, accorsing to these numbers has jumped about 15% over the same period.

Palm must certainly be one of the saddest stories of mismanagement since 2003 that I can remember. What is worse is that we write these things, not on the heels of recent game changing hardware or software releases. Palm looks to do little more than me-too WinMob hardware updates for the next year. Seeing there recent track record, I would very loosely use the term "me-too".

The hope is over a year away from hitting the shelves. How much like a ski slope will that bottom line look by then? Will anything be left to ressurrect, even if Palm magically delivered a stable and compelling OS running to cutting edge hardware. Makes lottery odds look reasonable in comparison.

Death can come swiftly to a market leader

"Death can come swiftly to a market leader. By the time you have lost the positive-feedback cycle it's often too late to change what you've been doing, and all of the elements of a negative spiral come into play." - Bill Gates, "The Road Ahead", Chapter 3

"In this business, by the time you realize you're in trouble, it's too late to save yourself. Unless you're running scared all the time, you're gone." - Bill Gates

"Once you held the secrets of the world within your hands, Now you're just another grain of sand" - How the Mighty Fall, The Alarm

"In another room, a few executives watched Carl Yankowski's interview on CNBC, taping it for playback at the employee meeting that was to commence in minutes. After CNBC announcers gushed over "the most talked-about IPO," the camera cut to Carl Yankowski in the Nasdaq studio. Usually a compelling public speaker, Yankowski seemed out of his element. When asked about larger screens for palmtops, he answered stiffly, "We are well positioned whichever way the market goes."
As the interview came to a close, the reporter said, "I've got to ask you about your suit." Yankowski smiled. He was wearing a very special suit, he let on, designed to satisfy the public's high expectations from Palm's IPO. The shiny pinstripes woven into the otherwise standard wool suit were made from threads of pure gold. CNBC cut back to the studio anchor. "Was that for real?" he asked the correspondent. The Palm managers assembled around the TV set looked at each other. "We're not showing this video," one of the executives decreed. Then they walked out to start the employee meeting."

(Palm's IPO was 8 years ago yesterday! Peaked at $165/share! And here we are, 8 years later, STILL hoping for "larger screens for palmtops"!

Jeffery sales another 15k shares and in less than two years from now all the shares he got from the purchase of Handspring will be gone. At least Donna must have some faith as she is not selling her shares every week. Beside Ed on Jon's puppet strings and Donna sitting on the Board in nothing but a gratis seat, all we know of Palm will be gone. Can the old Apple blood bring new life to the Palm name/company? We all will have to sit by and wait. Palm is on life support but not dead yet.

Death didn't come swiftly for Palm. It's been at least *six years* of them ignoring users.

Their FAIL is we--earned, well-deserved, and well fought for.

I'll be happy to piss on their grave.

What about overall numbers - the chart isn't clear

The percentages are constant, but what about the raw numbers?

Are Palm's percentages decreasing because they are selling the same number of units while the market is growing? Are RIMs sales numbers going up, but it's market share stabilizing? Are these just Treo numbers because the Centro is considered a 'consumer' device? Are these just POS Palm phones or Winmob phones as well?

The chart is clearly labeled % of companies, so it definitely shows Palm is losing market share in Corporate IT market.

I am not surprised by this. My company is BB only because they are easier to support.

Per the ongoing at the moment talk:

Apple knows how to put on a show. Hope PiC has the full poop in an article.

Now make it for REAL!

Because PalminfoCenter is rapidly losing a reason to exist!

Refresh regularly to get the latest.

The reason this entire thread is under THIS article is because Apple is solidly aiming at enterprise (and...ahem...prosumer) with this talk.

Interesting...the current topic is "Epocrates" (the doctor thingee) with screens somewhat similar to the weird drug info strangeness on PiC yesterday that I sent you a Heads Up about (and is now off this site).

You in cahoots with Apple?

Ryan: re: iPhoneInfocenter.com - you need an iPhone optimized icon! - http://vjarmy.com/archives/2008/01/howto_iphone_webclip_icons.php

PhoneFavs.com has one. It's also listed at Apple's site:

I don't see any reason why anyone would bookmark iphoneinfocenter at this point tho, besides apple hasn't been too kind to sites that use iphone in their names. They won't even allow you to submit your webapp if you use iphoen anywhere in the product name or in any portion of the url.

Yeah, well, I own the iPod Air WordPress blog domain.

If Apple Legal comes knocking, they can see this:

(That, of course, wouldn''t stop them from having MATT take it away from me. Eh.)

Freakout - I guess hell has officially frozen over!

Apple has finally released their iPhone SDK - now you have one less reason to bitch about the iPhone.

^^ You are correct. That leaves the lock-in contract, the 2G radio, the non-removable battery and the crippled Bluetooth as sticking points. :P

can someone please tell me which is the best BlackBerry forum?

If so, are you still going to post on PIC?

not yet. i''ll let you guys know if i make a switch.

Gekko, now that Exchange, ActiveSync and StyleTap are imminent for the iphone, will you be giving it consideration?

I must admit I've been getting on quite alright with my Tytn II Windows Mobile 6 handset. Yes, in some areas the interface has been clumsy but it's been productive and reliable for me. Palm should have produced a Palm OS phone with wi-fi and 3G yesterday. Palm's already a long way down that spiral.

I don't see Palm surviving another five years unless they pull off something spectacular, unfortunately there's no showman like Steve Jobs at Palm Inc. Worse still, Steve Jobs the showman is pushing a product that competes directly with Palm's.
Like them or loathe them, Steve Jobs and Apple have that drive, that hunger for innovation and success which Palm has lacked for so many years now.

I was impressed with how many applications appeared unofficially for the iPhone. Now apps are official and can be distributed with ease using iTunes, it seems the writing's very much on the wall for Palm.