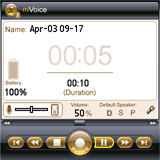 Motion Apps' popular mVoice app has received an update to version 5.5. mVoice is a phone call and voice memo recorder application for Palm OS and Windows Mobile Treos. The Windows Mobile version of mVoice is still at version 5.0, however, this 5.5 update features an overhauled user interface in addition to the new feature of automatic phone conversation recording. Other additions found in this update are a new noise filter while recording and a built-in phone call log. In addition, all 5.x versions of mVoice feature an update checker built into the app. This permits Treo owners to download the latest version over the air and install it to their devices without having to Hotsync with a PC.

I bought mVoice 3.0 or 4.0 for my T600 and have always found it quirky but the phone didn't come with a voice recorder. Why buy what you already have in the T650+ line?

Why? Because the VR will not record phone calls. Yep, the 680 has a nice VR, and that is enough for many. But, the 600, 650 etc do not have VR and therefore this is a great app to handle that.

I personally use CallRec, the competitor to this. Otherwise I would buy this right now for my use. Call recording is invaluable for business info while driving.

I'm going to try and squeeze in an updated quick comparison test between this latest version of mVoice and the minorly updated CallRec that was released a while back (4.1).

Right now it looks like mVoice has benefitted from an overhauled UI and some pretty nice new features. It should be a closer contest this time around.

Good job to both developers for not standing still and releasing incremental but worthwhile updates for their apps!