Say it with Pictures with iSketch

Motorola has released iSketch, which lets users handwrite notes and make sketches then send them with an infrared or other wireless connection. The messages are also compressed and encrypted. Craig Peddle, General Manager of Motorola's Lexicus Division, said the company is in talks with with Palm to preinstall iSketch on its PDAs. It is available now for $10. 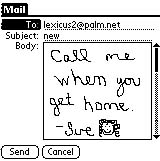 Thumbnail views provide for image review. It includes pen, line, and eraser tools. Images can be given titles and placed in categories.

"Sometimes a text message just doesn't fit the need," said Mr. Peddie. "Imagine a commuter rushing through an airport, or sitting on a noisy train, who needs to send a quick note but cannot open his laptop to initiate an e-mail. Or someone who wants to write and save a quick note to himself as a reminder that he will refer to later. This technology adds real value to wireless devices by expanding the ways they can be incorporated into the communication setting."

A next version is already being developed and will be available before 2002. Peddle said it will include animated clips.

BugMe! Messenger from ElectricPocket can also do many of these same functions but costs $40.

I.M. Anonymous @ 5/10/2001 8:38:31 AM #
Adding the ability to send the messages by SMS would be great. Many people in Europe use their Palm to write SMS that are then fetched through IRda enabled cell phones. SMS are particularly popular among teenagers. I think Motorola would have a huge market there.

Go out and get DiddleBug people. Its free and does the same thing! Or DrawIt...

fkclo @ 5/10/2001 11:55:01 PM #
Strange that no one mention BugMe Messenger, It allows sending of sketches / or typed text / screen shots to normal POP3 email address. One can choose to send the pic as compressed jpg as well.

It works very well. Not a SMS client though.

I.M. Anonymous @ 5/12/2001 1:16:47 PM #
I am kind of curious why, with all the color handhelds on the market, these sketch pad apps don't have at least limited color support for color? I can think of several circumstances (for instance, drawing a map) where color would be quite useful, even if the pallate was only 4 colors.