The Star Trek Influence on the Palm OS

An article in the San Francisco Gate takes a look back at Star Treks influence on modern gadgetry. Among one of the primes examples, is the influence of certain Trek designs on the Palm OS and Treo Communicator. 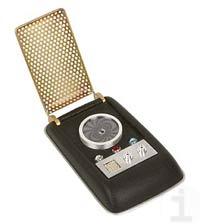 Nowadays almost every handheld with a flip lid, instantly warrants comparison with Captain Kirks notorious communicator. Aside from the obvious association with the communicator, the SFGate article reveals a few other previously unknown throwbacks to the pioneering sci-fi series.

"When I designed the UI (user interface) for the Palm OS back in '93, my first sketches were influenced by the UI of the Enterprise bridge panels,'' said Rob Haitani, product design architect for Palm-One Inc. [...] "Years later, when we designed the first Treo (a combo phone and wireless PDA), it had a form factor similar to the communicators in the original series. It had a speakerphone mode so you could stand there and talk into it like Capt. Kirk.''

Rob Haitani was one of the original engineers behind the development of the Palm OS as well as the Treo line of products. He is often credited with coining the "Zen of Palm" mantra.

Thanks to Engadget for the tip.

No wonder I feel like such a geek using my Treo 180. The flip lid always makes me feel quite conspicuous using it on the subway, now it will be even worse since it was ** officially ** inspired by the Star Trek communicator.

Palm Shmalm, it's cell phones that are the "communicators"

What you should be referencing is the Tricorder!

The design influence for the first Treo's was definitely the communicator.

I was thinking more along the lines of function.

Also, it seems that you CAN actually use the energy cells from several Palm handhelds to refuel a shuttlecraft.
My bad.

(Just don't dump and ignite it unless you're trying to attract attention while breaking orbit...)

mikecane @ 3/15/2004 6:15:39 PM #
"In the first pilot, Mr. Spock used a viewer in a meeting room to display what resembled a primitive PowerPoint presentation to the ship's executive officers."

"Rob Haitani, PalmOne designer: I have to say I was most inspired by the vision of racial equality. Remember in those days, Japanese people were portrayed on TV as buck-toothed clowns with thick glasses. But on Star Trek, there were Asian and African American bridge officers, and starships with Japanese names."

-- Rob! I just watched an episode of "Johnny Staccato" on Trio and the Japanese portrayed on that were not stereotyped. And, hey, what about Bruce Lee as Kato on "The Green Hornet?" Plus, we all bloody worshipped Tesuka as kids (Astro Boy!).

"-- Television broadcasters and makers of TVs were still in the early stages of the transition from black-and-white to color, and many households had only one TV. A typical "big screen'' TV of that era measured 23 inches diagonally and was housed in a wooden box."

-- the advent of the NBC Pea****. "The following broadcast is brought to you in living color by NBC!" And, yeah, you had to *polish* the damned wooden box the set was in. And its resolution was pathetic. And it had *knobs*!

brad @ 3/16/2004 3:24:55 AM #
What is even funnier it that I just registered for this account on PIC and somehow was sent a link for someone elses account so when I log in I can see someone elese info and my name is now Brad.

Oh yeah, and Stephen Lea**** is a funny Canadian writer.

elo @ 3/16/2004 5:34:33 PM #
The unfortunate thing about overuse of censorware is that, in situations like this, it actually serves to remind the user of a naughty word that isn't being used. It's as if the software itself was swearing at us.

Don't get me wrong - I'm all for cutting out language that is clearly appropriate. But it's hard to miss the irony here.

It was called a "hydraulic bed" and it appeared in "Stranger in a Strange Land". Boo-yah!

It's official: New palmOnes next month!

mikecane @ 3/17/2004 9:12:03 AM #
"People can expect new devices, to be unveiled next month, to provide much more in terms of multimedia storage so that they can take their favourite images, music, video and other files with them when they are out and about, as well as giving them a link back to the office or to their e-mail."