With an imminent release rumored for July on Sprint, the floodgates of Treo 800w images have been opened. Starting with a now-pulled Sprintusers forum post and quickly spreading to other sites, several new leaked spy shots clearly show what appears to be a production version of the Sprint Treo 800w. While still substantially less sleek and stylish than the GSM 850, the 800w does look nearly identical to what the earlier pre-production leaked photos suggested.

An additional forum post from someone who claims to be a Sprint employee is suggesting that the device will debut on July 13th on Sprint, with a final price of $250 w/ 2 year contract and after an undisclosed amount of mail-in and instant rebates. Read on for further pics and details. 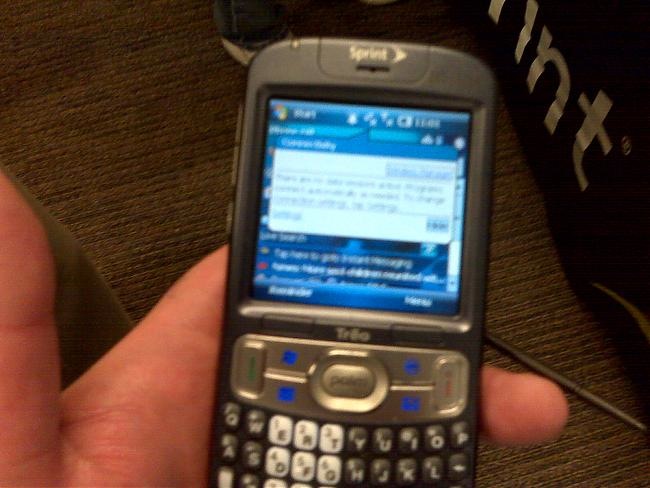 Size-wise, the device does appear to fit about halfway in between the Centro and the older Treo 680/750/755p. Judging by the image of the front of the unit, the screen size looks to be larger than the Centro's small 320x320 LCD but Palm's recent trend of omitting some button illumination looks to continue here, with no evident backlighting of the d-pad arrows or the two WM-exclusive multifunction buttons under the screen. 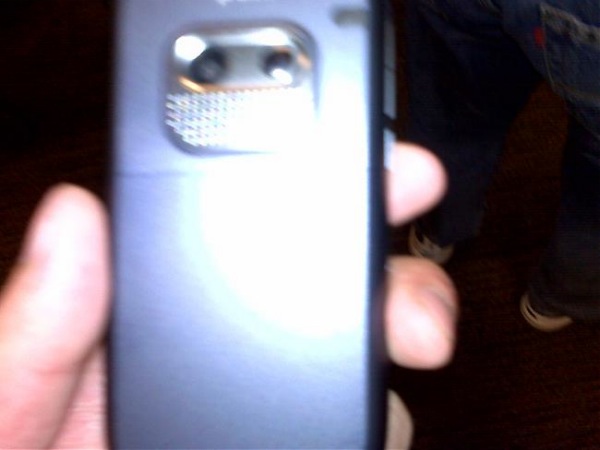 The back panel appears to have been redesigned yet again, with the camera lens moved higher alongside the portrait mirror instead of its prior placement under the mirror where it was easily smudged or blocked by the user's hand. The rear speaker grille and integrated antenna appear slightly restyled as well.

I am sure the Verizon 1.3mp camera was a typo and it'll have an identical camera.

There are two areas where I can realistically see see the Sprint vs. Verizon 800w's differing (other than in appearance/colors):

1. Verizon's version being Rev.A capable out of the box due to being released ~4-6 months after Sprint's. Sprint's device would be standard EVDO Rev. 0 initially and needing a forthcoming ROM update.

2. I can see Verizon locking the GPS receiver so that it only works with the overpriced Verizon subscription-based VZ Navigator service. Boo! Verizon had better drop their "everything" package for data/voice/SMS/navigation down considerably in price if this is gonna be the case

So how come the camera resolution changed?

Not bad for Palm if HKKs spex list is accurate. But one thing that this finally solidifies is the fact that every excuse, distraction and outright lie offered as reasons for no WiFi on Treos since the 650, were exactly those. Better late than never Palm.

As far as GPS and VZW goes, I would initially think the same thing concerning their rediculous proprietary "V-cast" fee based swindle. But, looking at Sprint spiraling down more and more as a direct technology competitor, makes it appear to be a worthwhile strategy. Hey, as long as the cell phone herd doesn't know any better then the show goes on. As the wise investor once said "Never preach to the market". VZW just keeps on rolling. Geeeesh.

Huh? The original, original 800w rumors (dating back to May '07 IIRC) always suggested a 2.0 megapixel camera.

Then Verizon had that leaked slide a few weeks back with 1.3megapixel camera which is apparently a typo. Someone at VZW probably just looked at the specs of the 700p, 700w/wx, 755p and Centro (all of which are 1.3mp) and just copied that on over for the 800w.

I'd pretty much say that starting with last year's Treo 500, 2 megapixels will be the default Palm camera resolution going forward.

I still don't think anyone's been ab le to say with absolute certainty that the 800w will ship with WM 6.1 standard or if that'll be a downloadable update later on. Other than that, I find the "leaked" specs quite plausible. I'm just worried about the screen size (it may very well be the exact Centro LCD) and the battery life.

Looks a little smaller then the 750, which is a good thing.

And the soft touch finish is a very nice touch, no pun intended.

It does look nice. Looks narrower when it's held in the hand like that. I like it.

Who cares about the camera?

I could care less about the camera. Get the darn thing to the market! This money is burning my pocket! I have called sprint so much about this phone til they know my name by heart.

If its not what its all cracked up to be; then hello new i-phone 2.0.

I hope it's the next best thing because the new i-phone has stepped up to the plate for us buisness users. Palm had better come with it.