Battle Your Heart Out with TakTik

TakTik is a new tactical game similar to Stratego. Players face each other across a board and try to defeat each other with teams made of several types of pieces. The only way to find out the type of your opponent's pieces is by attacking them. It has support for both high-and regular-resolution color screens and is available now for $12.50. 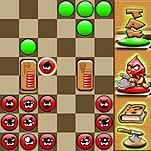 The goal is to defeat the enemy by either blocking it so that it can't move, capturing the enemy princess, or having your own princess reach the opponent's side.

Because the only time an opponent's pieces are revealed is during a fight, the game requires a good memory. The ability to bluff well is also critical.

Games can be played against the computer or with a friend. Playing head-to-head on two handhelds via infrared is coming soon. A grayscale version is also in development.

TakTik was created by the same team that created Ababall.

Related Articles...
More articles about Games
Battle Your Heart Out with TakTik http://www.palminfocenter.com/news/2861/battle-your-heart-out-with-taktik/

So slow, it had to go

I.M. Anonymous @ 1/22/2002 1:12:45 PM #
On my 760, this renders screens and responds to input so incredibly slowly that it's completely unplayable. What were they thinking releasing this awful behemoth? Was the HiRes version even beta tested with Clie users? Methinks not. For shame, Ababall!

In that case, the OS is dynamically converting the colors from 16 bit to 8 bit, which is very very slow !

So, be sure you are not using any hack or application that force the video to stay in 8 bit mode and of course, be sure your device is able to display 16 bit graphics ( upgraded Clie devices ).

Feel free to contact our support ( support@kickoo.com ) if you have any problem.

I.M. Anonymous @ 1/22/2002 4:31:12 PM #
That DA screen bit selector thing is not the issue. it's still slow for me. actually i turned everything off and well, screen changes are slow but gameplay is alright. Anyways is this program even making use of the MQ1100 graphics chip that's in the Clies?

TakTik use the Sony High Resolution API, which in turn use the right video chip depending on the device.

Great Games, I love the graphic and the game play :)

who is the artist!!

I.M. Anonymous @ 1/22/2002 5:42:39 PM #
just looking at the screenshots i notice the graphics straight away. i havent seen graffiti style done so nicely in a game for awhile! props to the artist!!

I.M. Anonymous @ 1/23/2002 12:18:55 PM #
Just downloaded the demo version last night and spent a few minutes going through the tutorial. This game has some of the best graphics I have seen on a Palm. Hopefully I'll find some time in the next couple days to play some more to get a better understanding on the game play.