Madden NFL 2005 works with a variety of Palm OS devices. Developed by MDM, the game has been completely updated for the 2005 season and will be available on plug-and-play SD/MMC cards at leading retailers and via online software download. 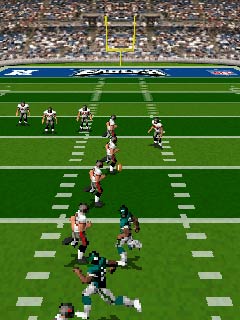 This version of Madden NFL 2005 features:

Madden NFL 2005 is available from MDM in October from major retailers and online at a suggested retail price of $39.99. It is also available from the palmOne online store.

hkklife @ 10/21/2004 2:16:12 PM #
PDArcade has a mini-review/initial impressions of the game. They played it on a lowly T|E and were very impressed with the graphics. It has a scaling playfield and good animation, even on a lesser Palm like the E.

I just hope this is the beginning of a trend and not a one-time experiment. I wonder if it will be possible to update the game with new downloable rosters and content like the PC versions of the EA Sports games? That would be especially important if there is not an '06 Madden but users want to keep their team rosters current in the future.

Also, any idea if this thing is Zodiac enhanced? Regardless, a very positive bit of news for the Palm platform. This'll help people take it a bit more "seriously" in light of the tons of new games coming out for PPC.

It looks great - BUT WHERE IS IT?

twizza @ 10/22/2004 2:43:07 PM #
According to a press release, it should be appearing for sale by the end of the month. I would wager that one may even be able to order it from some of the major game stores (EBGames, etc) so that they can start experiencing some of that PDA traffic too.

RE: Hmmm, I Wonder

Come on! Give us a DEMO where we can try 4 plays at least!

dentenman @ 10/27/2004 3:37:16 PM #
I received my Madden NFL 2005 card yesterday and I can tell you that I'm unimpressed with the sloppiness of the release. There's no help menu, and the sparse start-up instructions tell the user that the manual is available on their website in PDF format. If that's true I can't find it. Using their online search feature is of no help either. They don't even acknowledge the game exists in Palm format on their support page.

Additonally the audio does not function on my device (T3). However, that may be due to a conflict with another app or something so I'll withhold judgement on that front.

Next, I thoroughly enjoyed the game so far. It took a little time to actually get a good offense, now I just need to improve my defense. Graphics would look cheesy except that is on a palm sized screen, so I'd give it 4 for 5 on graphics. Play on a Zire 72 seems fine. As for sound, it is fine, but I am constantly hearing the same comments, which is okay for the moment, but not much variation.

One glitch I noticed is as follows: After a touchdown, I frequently go for a conversion. When I succeed, sometimes it says conversion succeeded. But, other times it would say my conversion failed when I actually did succeed. I am not sure what this is about, but if I succeeded, whether it says I failed or not, I am awarded the two points. If I actually did fail, then I do not get the points, obviously. While it is a problem, it can be dealt with. Also, the coin toss seems to favor tails quite a bit.

My scores (Yes, I am a Pittsburgh fan and I won all of these)

Either this game chews up processor power and therefore, battery, I play too much, or a combination of the two, the battery seems to deplete a bit faster.

Someone mentioned how sweet it would be to pass by tapping the stylus. Unfortunately, this is not so. Everything is accessed with the hardware buttons.

There was no Demo available until now as far as I know.