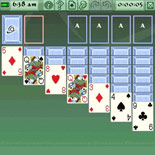 Astraware has released a new Solitaire game for Palm OS and Windows Mobile devices. Astraware Solitaire features 12 of the most well-known and best-loved single player card games. The games include Klondike, Pyramid, Spider, and Freecell, and to make the playing experience both familiar and fun, each game has custom gameplay options so everyone can enjoy the games using their favorite variation on the standard rules. The game's controls have been specially designed to be simple and comfortable with both stylus or 5-way play, and along with just the right balance of effects really make it easy to play and feel like you would when playing with a real pack of cards.

"We really wanted to capture the best things about Solitaire, easy to get into, enjoyable to play, and the nice feeling of playing with cards that sometimes computer games don't capture." Said Howard Tomlinson, Astraware CEO and Game Designer. "Playing just one game at a time is great, but we added the extra incentive of collecting trophies for various achievements within each of the games for those people who want to have a longer goal too. You can play straight off with the normal settings, or customise it in all kinds of ways - it's your game, so we feel you should be able to play it the way you want to!" 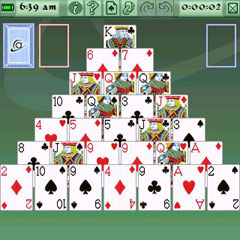 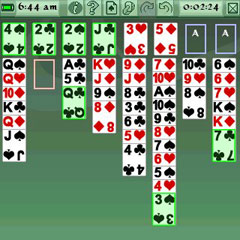 The game includes a choice of card fronts and backgrounds including a familiar traditional set with beautiful face cards, and a clear card face which is better for those with visual impairments, or for playing in bright daylight. If you like to track your progress, the game statistics will tell you how long you've played and how often you win, a fun trophy system is in place which unlocks extra card graphics and the highly sought-after golden trophy pack of cards.

Astraware Solitaire is available now with a free trial for PDAs and Smartphones running Palm OS 5 (with hi-res screens), and Windows Mobile. It is priced at $19.95, but is currently on sale for $9.95 for a limited time.