Bejeweled 2, the sequel to the best selling PDA game, Bejeweled, has made its handheld debut on the Palm OS less than a month after PopCap's PC version and retains all the features of its bigger brother, including four standard play modes, classic, action, endless and the all-new puzzle mode. 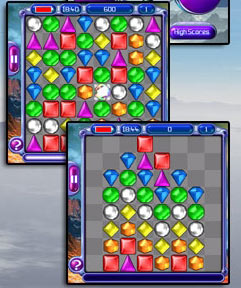 "Bejeweled 2 will take the Bejeweled phenomenon to the next level, and will become our flagship PDA product moving into 2005." said Howard Tomlinson, Astraware CEO and self confessed Bejeweled addict. "It is nearly four years since the first Bejeweled for PDA launch captivated players and allowed them to take their addiction with them as they go. Bejeweled 2 takes that even further, with new modes, a fantastic new look, and Hyper and Power Gems to add an extra level of play to those who crave more strategy to their game."

Thanks to PalmAddicts for the tip.

It even runs well on my Sony TH55, which doesn't always do well on all games.
Not perfect mind you, compared to a higher-powered handheld, but one heck of alot better than Super BounceOut!.

Wolfgard @ 12/7/2004 10:07:20 AM #
NICE! I just tried the trial version and it rocks on my TH55. It's abit slow during transitions between levels, but other than that, it's great. I'm gonna get this once I'm done purchasing my university textbooks and project equipments.

Incredible graphics, animation and really well nicely designed menus. Nice music and good SFX and MortalKombat style speech ("excellent") and the gameplay, well it improves even further on Bejeweled 1 - it's the most addictive game I've ever played on Palm OS, I've been waiting at bus stops playing this and have missed buses as a result of being too involved in this - it's just toooooo good.

RE: Bejeweled 2 roxors my boxers!

ackmondual @ 12/7/2004 11:48:45 AM #
I like this game b/c it's not as 'stale' as the first one. IMO it got boring too quickly when all u do is just frantically clear out gems for hours and hours on end. In Bej2, puzzle mode give you more variety. And while Action mode for me is harder than ever, they motivate u to play with unlocking features

RE: Bejeweled 2 roxors my boxers!

Hal2000 @ 12/7/2004 9:02:19 PM #
Nice music and scenery, but the demo has to be opened up to 480 everytime you start or use an option on the zodiac- an annoying quirk- I love my apps to all open up in fullscreen. Still, a great improvement. Maybe the full version has this fixed. Sound on the zodiac is amazing on this game. It should have supported rumble or vibration. Love the voices and backgrounds changing.

I never played the orignal Bejeweled, and I am glad. This is way too addicting of a game!

Your mind resembles the wings of an Ostrich, It enables you to Run, though NOT to Soar! -- Thomas Babington, Lord Macaulay

VisorMiser @ 12/8/2004 9:34:51 PM #
$20 is a tad steep. Game really sounds good but I'm thinkin' twice till they offer some kind of discount for registered Bejeweled 1 users. A modest upgrade disount is not only accepted industry practice, it's an appropriate way of rewarding the zillion registered users that made the game a blockbuster success.

I doubt if Astraware will miss me and I realize this means I may never get to upgrade.

To those who have: Enjoy!

RE: Why no upgrade?