Nearly lost amidst this week's flurry of news surrounding the Palm Pre and WebOS, even more solid evidence has surfaced confirming the existence of a CDMA Treo Pro. The CDMA version has now earned a stamp of approval from the FCC and a few of the supporting documents are now online.

Palm has likely held off making an official announcement of this anticipated release until existing Treo 800w stocks are depleted or until the smoke clears in the aftermath of Palm's enormous CES announcements. Palm's CDMA version of the Pro will be its second EVDO Rev.A-capable device and is powered by Windows Mobile 6.1. 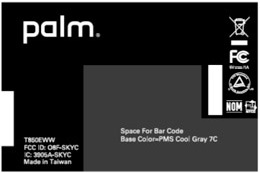 Making the rounds of the rumor mill since last August, the CDMA version of the Pro is expected to be a Sprint exclusive, replacing the short-lived Treo 800w as we reported on last month.

Earlier evidence "outing" the device came in the form of a DSL Reports speed test log result in October. The device shares its older GSM sibling's "real" model number that denotes it as the Treo 850. The full filing report can be found on the FCC's web site.

...including that "US carrier" that was supposed to pick this one up, care anymore?

Enterprise and business users that have standardised on WinMob just might... or have you forgotten why Palm got into WinMob in the first place?

I seem to recall the consensus was that Palm went with WinceMob when they lost control of PalmOS when Access picked up Palmsource. Now that Palm has finally built a new OS they're going to be stuck building WinceMob devices for a while. Apparently there are still people or companies that actually want that buggy slow OS.

This is NOT a consumer phone. Unless the consumer is an idiot.