The MorningPaper blog is reporting that the new Palm OS-based GSM Treo seen in the recently-leaked cameraphone spy shots is decidedly not the rumored 800p.

What this may indicate is that the new formfactor now seen in a series of leaked blurry spy shots may actually give birth to four different individual devices featuring different operating systems and target markets.

The possible configurations could include: 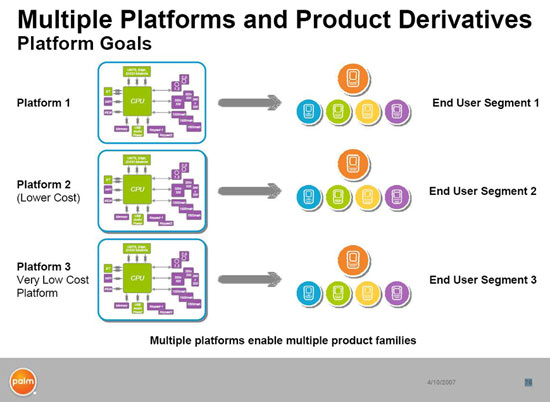 Adding fuel to the myriad of rumors reported above is page 76 from Palm's Analyst Day presentation from April 10th of this year. That particular slide (displayed above) shows a three-tiered device strategy for Palm's Treo line. All of the rumored specs for the four potential Treos outlined above do appear in some manner on the Analyst Day slide.

Several hints at future hardware offerings were suggested by the slide's graphics, including three different sizes of LCDs: large 320x320(the traditional Garnet and possible future WM6/Palm OS II Treo screens), small 320x320 (for the 690p), and 320x240 (for future Windows Mobile Smartphone devices such as a Treo 690w). Both 1.3megapixel and 2.0 megapixel cameras appear in the Palm PowerPoint slide with no reference to VGA camerasperhaps a sign that the Treo 680's is soon to reach End-of-Life status.

A new Palm (Palm OS) is always good news. Plinux is backwards compatable, right? Hopefully it will be better than the latest rehash of the tired old Treo 600.

Regarding the mentioned new PalmOS II:

I just wonder how this Palm announcement (seen at 1SRC http://www.1src.com/headlines/show/001972.html) comes in?

Just to give you some food for thoughts. :)

No, there is no indication that the OS for the Foleo will have any relationship with the upcoming PalmOS II on Linux, except they both have a Linux-kernel. That is, they're both fruit, but differ like apples and pears. ;)

For the time being, they will make use of Wind River's solution, but when they get more experienced with their own PalmOS II on Linux, I can envision them moving back to one company, one OS.

But as for now, they don't have any in-house Linux technology that is ready for production, do they need to outsource it to Wind River Systems.

Wild thought -- over at Tamspalm, Tam Hanna, who is obviously well plugged-in, has recently posted some cryptic comments related to Palm OS 4, like these:

"As for Palm OS lowlevel internas, I expect a huge flood of OS4 internals to flood the market soon. Cant say more ATM though...except that staying OS4 compatible may pay out big soon!"

Is it possible that Palm's third, "Very Low Cost" Platform is actually [an updated version of] .... Palm OS 4??? Probably still on 68k?

Would make sense (kinda/sorta) to do a dirt-cheap GSM, OS4-based featurephone, especially for emerging markets. But I really don't see a huge advantage of OS4 in any major areas. And OS4's weaknesses--major security issues, for one, and nearly non-existent wi-fi and BT support for another--would seem likely to pale in comparison next to a bare-bones Garnet architecture.

And OS4'd probably introduce enough compatiblity and support headaches that any cost savings or power thriftiness would be nullified.

My personal take on Tam's tidbit? There are perhaps too many issues surrounding a Garnet emulation layer residing on top of PLinux. SO...Palm's gonna say that "Palm OS compatibility" only extends to programs written to support OS 4.1.2 or older?!?

This sort-of makes sense from the point of view of a supplier, similar to Apple, who doesn't want to risk any application crashing their cell phone or other user device. When an 68k application crashes inside the Pose VM, it does not take down linux or OS X, for instance. The Windows or Mac GUI can still respond to the user (browsing the web, or making a phone call, for instance) while Pose quickly gets rebooted in the background. Because of the emulation sandbox, OS 4 can be VM'd a lot more securely than OS 5. This is similar to a JVM sandbox, except that Pose apps are typically a *lot* more responsive than Java applets when run in small battery operated environments, as well as JavaScript run in a browser.

Good points... So maybe the very low cost Platform 3 is actually Garnet, while 1 and 2 are Windows and PalmOS II.

The Dock is nothing but a glorified Windows Quick Launch bar. Give me a Taskbar or give me death!

We'll probably see a parallel with 320x480 (or larger) being introduced into the Treo line and under Plinux with how it was introduced in the PDA line under Garnet:

All I want for Christmas is Palm OS UMTS...

If Palm wants to begin to compete with the iPhone, a nice place to begin would make these new phones easily sync-able with the Mac.

Thank you for the ''leaks''. The Foleo curveball + rumors calling that toy phone your next 800 level Treo pushed the remaining faithful to the brink of Palm suicide.

Nice recovery. And highly welcomed btw. I haven't seen so many + thots around here since eTullurian got banned. Now, better get those screenshots for us.

E-mail me some and I'll mysteriously blog them. Everybody around here trusts me reeeal good.

I kind of miss eTellurian. He was sort of the Luna Lovegood of PIC, don't you think?

Re: ET, any way he can come back and be limited to once a week or something? Yeah, I kind miss the guy too.

Re: E-T - The entity know ase-tellurian was only banned in the forums, where the constant off-topic nature of his posts became way too distracting for many members there. E-T is still welcome to post in the news articles, provided the content is somewhat relevant and does not detract from the discussions.

A people-driven solution based on peace makes for eminently logical thoughts. The price of democracy is bad choices, but we also see more unique thoughts. In the end it all comes down to a simple question: is your e-knarr discounting the price of freedom? If so we may all soon be using virtual wallets.

Sorry Tim. It's just not the same.

The e-knarr is the name of a prototype that could also be called friend-ship.

This would have been great news 1-2 years ago. It's just too late.

Will the new Treos sell? Yes. Will they be nearly as successful as they would have been last year? No way.

I have been a Treo/Palm user for years and years. Last week, I like many, many others traded my flawed Treo 700p for a Blackberry 8830. I hate that I had to do it but the BB is so much better.

Blackberrys are outselling Treos 2 or 3 to one and that will just continue. The new Treos will help, but they are too late to the market. Way too late.

Palm doesn't have to have to sell more Treos than RIM or anyone else to be successful--they're a much smaller company, for one thing. They just need to execute on their philosophy of delivering a simple, responsive mobile computing experience.

I expect in the coming years we will see smaller companies than Palm putting out much niche-ier handsets (think "The J. Peterman Phone in Peruvian Vicuña Leather") and making good coin of it. If Palm can keep improving and diversifying their products they'll do fine, too.

That's fine. They can go from the dominant player in the small, portable computing market to a niche player with 1% of the smartphone market.

I think if you asked Palm and their investors they would disagree with your vision for the company. They do want to out sell RIM, HP, Nokia etc and lead in the smartphone market.

I hate seeing all these new Blackberrys showing up on my customers, co-workers and now my own belt. It means Palm has failed.

Yes it is great to give consumers more choices. But your options must be competitive. Palms are not right now. In another 8-10 months maybe they will be, but by then RIM will have their newer, higher resolution BB's out and although Palm may put out a great Treo, the momentum of RIM is very strong in the corporate world. And no way Palm wins much in the consumer world right now.

By the way, as much as I would absolutely love a Linux Treo, I won't be the first one to buy any new Palms. The Q/A has been absolutely horrible. The 650 was a disaster until the firmware was updated a second time. The 700w was also a big problem. Don't even get me started on the 700p.

And no, I am not a Palm basher. I have consistently pushed Treos for years.

My point was that there is no "too late" beyond which Palm can't regain market share. It's all a matter of their execution.

I disagree w.r.t. the 650; mine never gave me any problems and it still works perfectly two-and-a-half years later.

And as for Blackberries outselling them? So what? Who gives a damn, so long as the Treo does what you need it to? It's like those who crow about the fact that the iPhone is going to sell millions; it means nothing except that the companies that make them have successfully reached the lowest-common-denominator of customers. Blackberries are the McDonald's of smartphones. Ubiquitous and adequate. Nothing more, nothing less.

Sales don't matter, except to those who unhealthily tie their moods to a company's stock price. So long as Palm keep producing the most versatile, user-friendly phones on the market, it doesn't matter much to me how many they sell to other people, 'cause they've already got my vote.

Stymied by U.S. wireless carriers, Nokia has begun selling "unlocked" phones, which are devices that can work on any wireless network, directly to consumers. All users need to do is remove the SIM card from their old phone, insert it into a new one, and -- voila -- start dialing.
....

"In Europe, people are used to it," says Michael Gartenberg, vice president and research director at Jupiter Research in New York. "But consumers here are not accustomed to purchasing unlocked, unsubsidized phones -- many don't even know they can transfer their SIM cards."

No, seriously, many American consumers don't know they can do this?! You've got to be kidding me.

But here's an interesting line:

Hey, where have we heard that before? ;-)